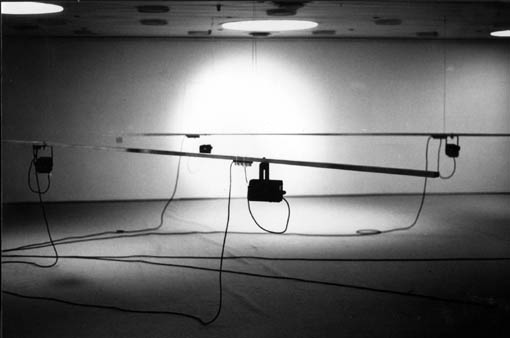 Interactive work with six (2 x3) halogene spots, three modulated infra red sensors, aluminimun tubing, charcoal drawings on the walls, electronics and radio transmitter and -reciever and two powerfull spotlights placed on a facade outside the exhibition space. Whenever one of the infrared fields is interrupted the spotlight, which is otherwise switched on, is switched off (two spotlights for each of the three sections), and the other spotlight is switched on and off according to prescribed intervals. The on and off intervals are then transmitted in a reverse manner to the two large projectors placed somewhere on the outside of the building, on some other building. The work, or any large or small light work say large public neon-structures, can thus be transmitted by radio or the internet say as a computer program.