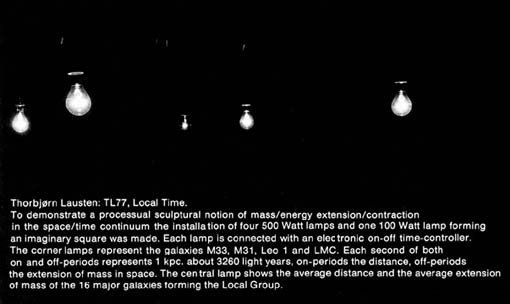 Four 500 Watt lamps occupying the corners of an imaginend square and a fifth, 100 Watt daylight bulb, at its center.
The 500 Watt lamps represent four of a total of 16 major galaxies in the Local Group of Galaxies: M31(the Andromeda Nebula),
LMC(Large Magellian Cloud), M33 and Leo I. Each second of operation during either an on-period or an off-period represent
one kiloparsec(kpc) or about 3260 light years. The time (sec) elapsed during an on-period for a corner lamp represents,
in kiloparsecs, the distance of a galaxy from the Earth; the time elapsed during an off-period s presents its diameter or
maximum dimension as observed from the Earth. The on-periods and the off-periods of the central lamp represented the average
distance of the 16 galaxies from the Earth and the off-period represented their average extension in space.

Though one may ask whether art becomes “scientific” or science “artistic” in visualizing (scientific) data, it remains a
fact that knowledge from the infinite small to the infinite large is constructed thus leaving us with the World as a mental construct.
The construction, however, can only be seen as concrete in that you see it as a universal constructive principle in art and in science.
“What we observe is not nature itself, but nature exposed to our method of questioning”, – to quote Heisenberg. 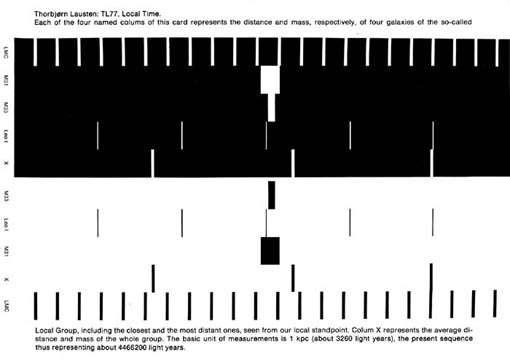 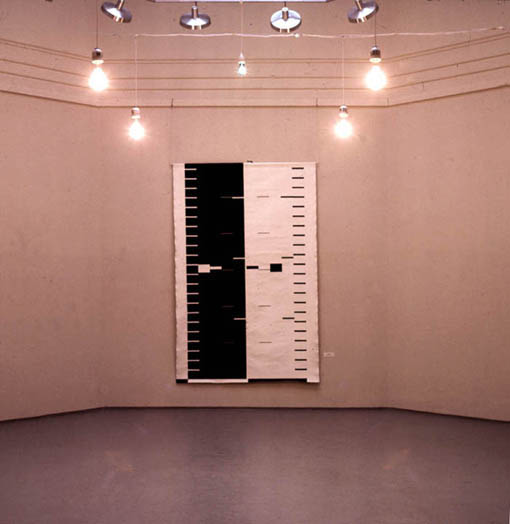