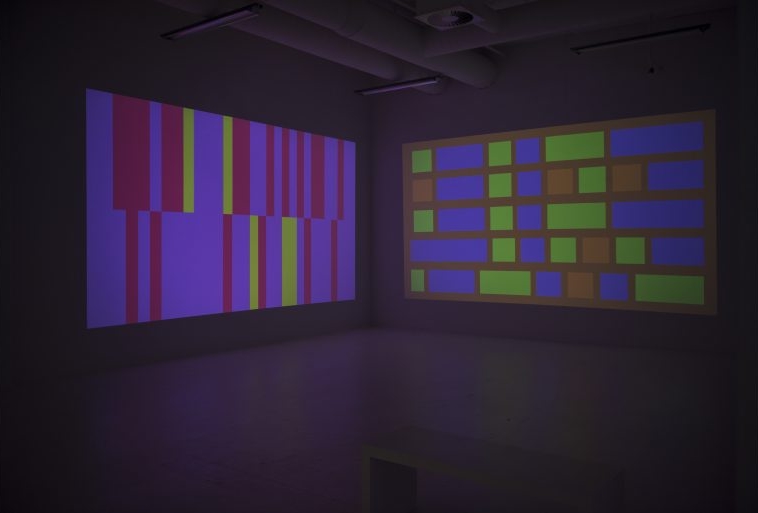 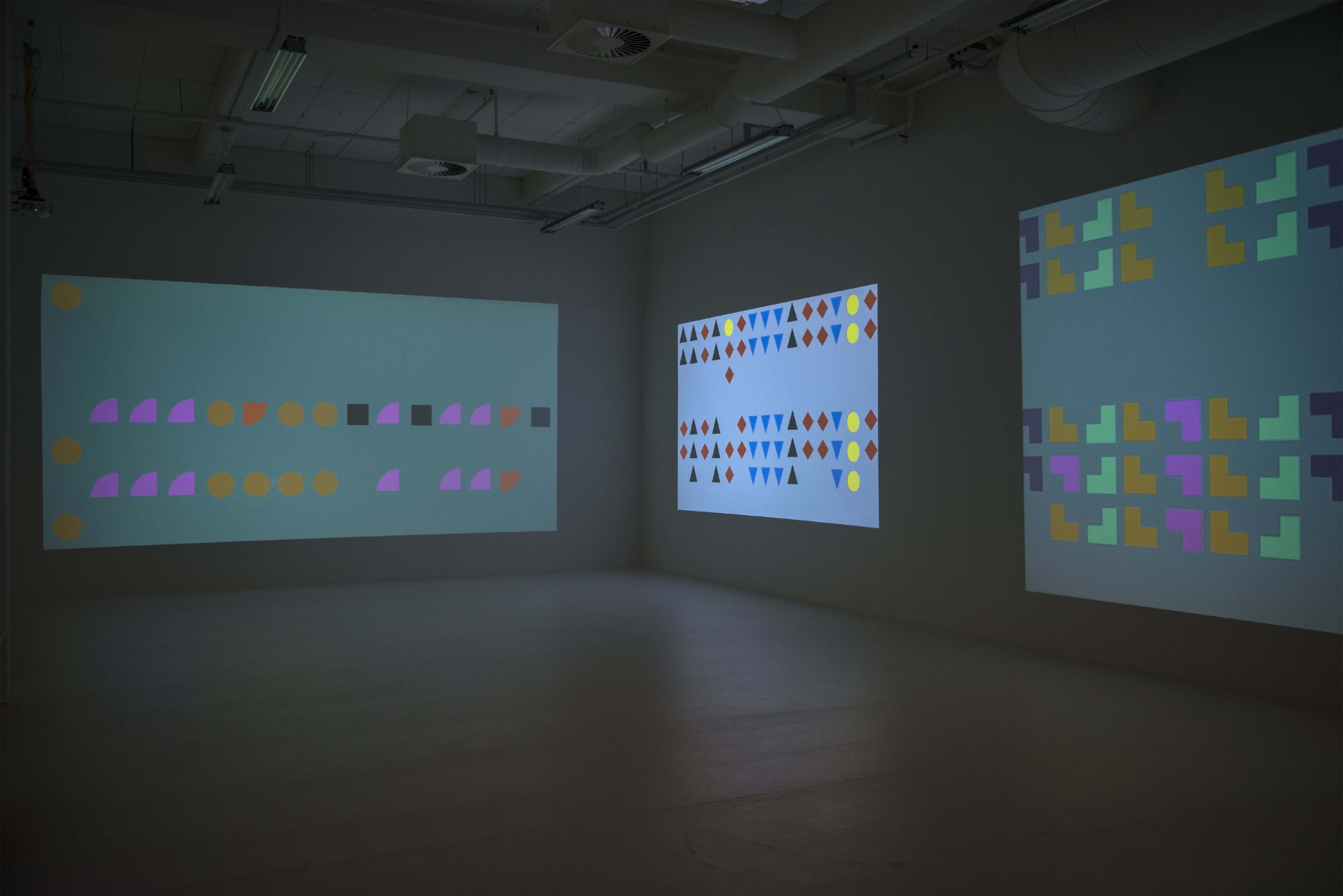 The exhibition and the project Biovision visualizes genetic data from seven populations from different parts of the world and from eight primates; the data visualized are shown as large video-/data-visualizations (as concrete abstract films) on the walls of the museums large exhibition space.

The project does not intend to inform about genetics and genetic research as such but to relate to to visualization of data in a both an artistic and a scientific context, an area of increasingly importance for both art, science and knowledge in general.

Three of the exhibitions data-projections show visualized data from these seven populations as they compare the socalled alleles between individuals and populations, i.e. the genetic potentials which determine heritable characters.

The remaining three data-visualizations compare data from these eight primates, which,  as the seven above mentionend populations, are stadard examples used in genetic research.

The visualizations of data from the primates compare data from that particular sequence of the genom which codes for lactase, and you might see, that there is no big difference between humans and other primates.

Recent years has, as we know, shown much progress in genetic research, and not least  the socalled fossil genetic material  has considerably contributed to a change in our under-standing both of the developement of humans and in understanding human migration from Africa to the rest of the world. We can, however, with our present knowledge state, that a number of human species have existed during past periods, but that there is only one race, however different we might look.

It is not only in genetic research that our understanding of the world becomes depending on complex technologies, and this goes for both the registration of data and how to understand the data, and here we mainly deal with visual technologies as large amounts of data (for the most part) only can be understood when they are visualized.  The role or the function of the said technologies is not always neutral as the technologies mostly are influenced by various theories and not least by economic interests. Hereto comes the interaction between the various individuals who deal and interprete the data and the technnologies which shows that we hardly understand the separation between humans and technologies.

The increased use of images thus demands a greater understanding of the construction/ genesis, the modes of functioning, codes, inventions etc. of these images as information to a very large degree is the result of functions in the relevant systems.

Many phenomena exist for us only as data representing these phenomena, data the origin of which is due to digital technologies, i.e. data that we have in the form of numerical values.

Numbers, however, have no emperical reality, they are imagination or invention but we do, none the less, in many contexts consider numerical values as reality. We do, thus, construct what we call reality on the imaginary, as constructed images, the modi of constructions that neither art nor science fully understand.

Not only humans but also technology influence the meaning/significance we get from data that have been adapted/changed which then brings us in the situation that technological ways of functioning, which to a large degree are the result of scientific theories, have a great impact on the way we perceive/conceive reality. It is, however, also clear that an/our understanding of reality based on numerical values not only is a scientific matter/issue but that the constructions based on numerical values are to be seen as aesthetic constuctions, which have the potentials of exact knowledge be it in art or in science, which I in other contexts have called numerical constructivism.

In dealing with genetic data we are also dealing with numerical data generated by advanced technology, theories and coding which have made posssible the understanding of the data within a specific area. The data used  in Biovision are represented as coloured geometric forms in exact accordance with the data used, a socalled one-to-one realationship. The colours are chosen arbitrary, which is also the case in most scientific relations, say medical or astronomical data-visualizations. It may, however, be difficult to understand that coloured geometric forms, which also function as signs, can have the same information as scientific data and may also inform about relations which are also knowledge and concepts.

It is unclear whether we, with our knowledge and with visualizations, describe or define existing relations in the world around us, or whether we ascribe our opinions or projections to the world around us, i.e. our mental modi of functioning. It is, however, clear that we, when we deal with images which have been formed/generated by calculations of numerical data, not are dealing images of something but constructions, and the content of these constructions is (numerical/logical) relations; as the media-philosopher Vilem Flusser has said: ”Es sind keine Abbilder, sondern Projektionen aus Kalkulationen”.

Thanks to prof. Eske Willerslev and associate prof. Martin Sikora, both Center for GeoGenetics, The University of Copenhagen, and thanks to Mikal Bing for programming.

Thanks to Statens Kunstfond for financial support.

Comments on the original text.

It is well known that numbers and counting has played a major role in human life and our cultural history, but with the advent and use of digital technologies numerical values have become( almost) indispensible for our civilization.

Seen in a modern/contemporary context I would like to refer to Cassirer, esp. the Concept of Number in Ernst Cassirer, The problem of Knowledge.

The socalled radical constructivism consider our world view/s as construction/s and I would like to refer to Heinz von Foerster, Erkenntnistheorien und Selbstorganisation,,Delfin No 4.von Foerster also makes it clear, that numbers have no empirical evidence but are mental constructs. It is, then, clear that even our most ”!exact” knowledge is based on such mentral constructs/imaginations.

Vilém Flusser has had, as we know, a great impact on (digital) media and has frequently referred to numbers and their use. Flusser has used the  concept ”reine Ästhetik” in connection with the relation between numbers and colours in Plato`s philosophy, cf. Kunstforum Bd. 108., pp 97.

Flusser has in another context dealt with numbers as inventions with reference both to history and digital technology; cf. Von Zahlencode, Vilém Flusser, Kommunikologie weiter denken, pp.114.

It is also well known that coding is of paramount importance and together with the use of algorithms influence nearly all aspects of modern civilization, and it is worth-while to consider, if not software/coding is going to have a larger impact on the future than hardware.

(The late artist/art historian Jack Burnham has dealt with this issue quite early; cf.:  Jack Burnham, The structure of Art). Burnham had the opinion that software might function as a metaphor for art, and that, in the signifing/coding process, the signifier also could functions as signified.

/content is mostly overlooked, an theme that Flusser also has dealt with (cf. Kommuniko-logie). An interesing aspects in this context is that we with digital visual technologies also can visualize concepts, (which, however, also was the case in ealier art), also scientific concepts, which very often only can be understod as visuaizations.

That coding often is related to modes of visualization and modes of thinking is often overlooked, hereto comes that even scientific coding often has an unconscious aspect/ component.

(I would personally say that ways/modi of thinking (Denkweise) also can be an artform (Kunstform), which to me is obvious when dealing with visual technologies, which visualize knowledge and concepts).

In the project Biovision I have been conscious of both aspects in the temporal and visual structuring of the project.

Biovision consists, as mentiond, of six dataprojections, each projection has two versions which means that we are dealing with twelve sequences, the duration of which is slightly different, which means that you hardly see the same combination of sequences.