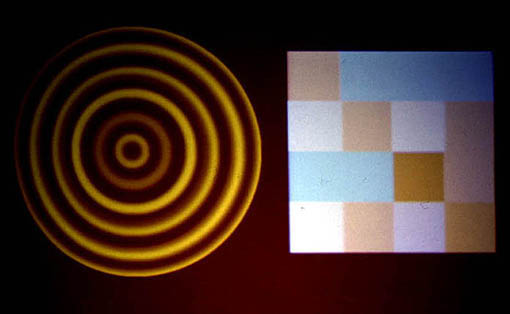 This part of the installation was mainly done in order to visualize radio waves from the Sun by digital technology and numerical relationships
seen as conceptual relationships. When radio waves, white noise, are picked up by an antenna, they are transformed by a computer in order t
o be simul-taneously visualized as a large video projection.
The right part of the video projection is a large square divided into 4×4 smaller squares each of which is given a numerical value of the magic
square in Dürers print Melancholia. The intensity of the colours is determined by the intensity of the radio influx. The computer is thus
choosing an arbitrary colour among 250,000 colours. After the run of the program another program is run transforming the influx into greytones only.
The left part of the video projection visualize the “history” of the sunspot activities as they have been recorded the last 300 years;
the visualization was done in two ways. One was a yellow disc changing its radius thus demonstrating the sunspot activity by being
smaller or larger. The second visualization was made by a system of concentric circles expanding from the center, each circle representing one year.
The intensity of each circle was representing the sunspot activity of that particular year. After 300 steps, each step is 1/2 second, one of the
two forms is replaced by the other.

(The assistance of the astrophysicist Ib Lundgaard Rasmussen from the Danish Space Research Institute was
indispensable in the making of this part of Light-Figure).